There wasn't anything fundamentally wrong with the radiator in the car.  It had been upgraded to triple core early in my ownership of the car - probably in 2000 or 2001 primarily to assist with cooling when towing the caravan.  So its been in the car at least 16 years and some of the core fins were looking a bit tatty.  Plus, its always had the standard plastic overflow pipe that's a bit feeble and the standard clip-on thermostatic fan switch mounting is, frankly, rubbish.

So, to go along with the rebuilt engine and repainted engine bay I looked around for a localish radiator repair specialist with a decent reputation.  Turns out that Cropper and Jones in Ellesmere Port fitted the bill - they even gave some advice on what to do with the fan switch mounting, which was to solder on an M22x1.5 boss to accept a standard Peugeot 205 threaded switch.

So here are the pics of the rad that was dropped off one day and was ready for collection the next day, rebuilt and pressure tested. Excellent service and a sensible price from C&J. 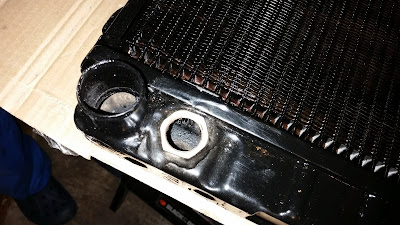 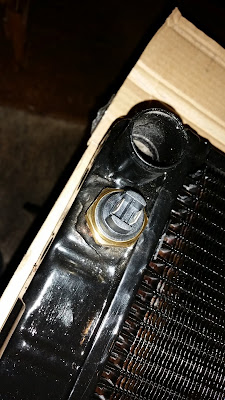